Old Chimney with no liner

If you live in a house that was built before 1950 there is a decent chance that the inside of your chimney looks like this. The problem with this type of chimney is the ability of carbon monoxide gases to escape through mortar joints and into living space. Carbon Monoxide is a deadly gas that is responsible for almost 500 deaths per year in the U.S.

Usually this type of chimney will not leak enough Carbon Monoxide to kill somebody but can be responsible for illness. If you have a brick chimney and the outside brick is starting to crumble there is a good chance that it’s doing the same thing on the inside and may have blocked the flue. 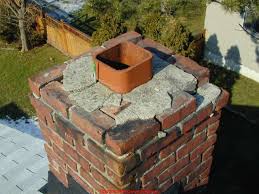 If your home was built after 1950 there is a decent chance that you have a clay flue liner that has been installed in order to better vent the carbon monoxide. A clay flue liner is better than no liner at all but doesn’t necessarily mean that you are up to code. There are several clay liners that have cracked or become damaged and are no longer effective. 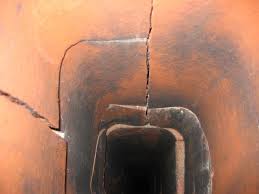 Here is an example of a cracked clay flue liner that will need a new liner installed to bring up to code.

A blocked flue is one of the most dangerous situations that can be created inside your home. A missing flue cap or screen can open your flue up to animals or debris from entering into the pipe. A brick chimney can also start to deteriorate and will crumble inside blocking off the flue.

We check the draft with every water heater we install to make sure the flue is venting properly.

Small animals such as birds, raccoons, and squirrel can get inside of a chimney flue and often become trapped and die inside. The corpse of a small animal can prevent the flue from venting properly and can cause a serious backdraft problem.

Here is an example of a contractor installing a new flue liner. This type of service is usually performed by a chimney specialist. If you would like to provide a bid for a chimney liner in Kansas City please give us a call. 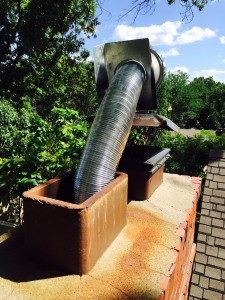 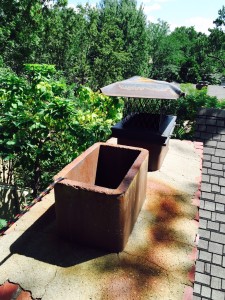 This is an example of a complete flue liner kit which usually comes in a 35′ role and included a vent cap and all the other parts needed for most installations.

The best way to check to see if a flue is venting properly is to do a draft check. When the water heater kicks on the heat from combustion should start to rise and eventually create a draw that will vent the exhaust through the roof. If the flue is blocked or there is a backdraft carbon monoxide will vent inside your home.

The picture above shows an AO Smith water heater which has plastic rings located near the draft diverter. The rings have melted which is a sign of a blocked flue. If your water heater is doing this you should call a professional as soon as possible.

Alternatives to a Flue Liner 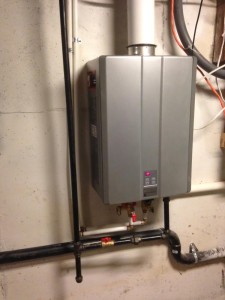 The cost to install a flue liner can offset some of the added expense go installing a high efficiency water heater such as a tankless or power vent model. Typically a power vent water heater will cost the same as it would to have a flue liner installed and regular water heater. A tankless unit would be about $1000 more but would provide an energy savings of up to $100 per year.